The rules were simple: no hands allowed on the 80-foot roadside 5.5. You could brace with your knees, though, and you were allowed two touches from the elbows, one head, and a penis (one boob for women). You got bonus points for chugging a beer before the start. Ties would be broken with a solo race-off to the death (aka The Bean Bowers Rule). 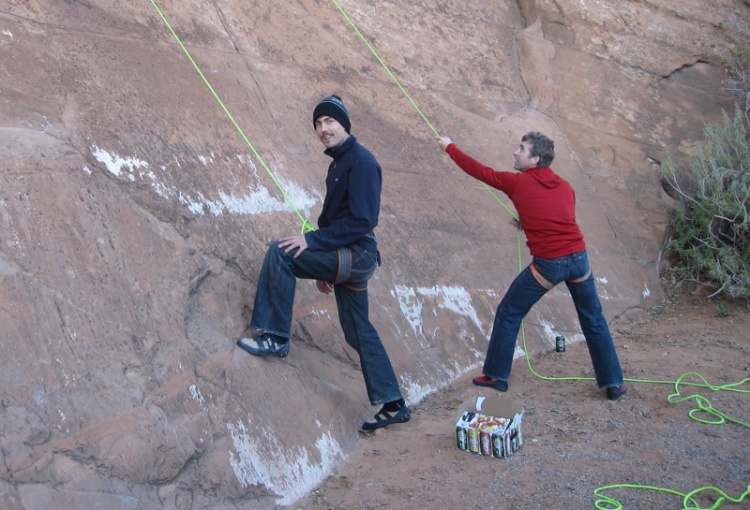 On your mark, get set...Sonnie ready to climb, Timmy ready for something.

I think the whole thing was Timmy O’Neill’s idea – of course it was. He’s like a chipmunk on speed, always chattering, grinning, jumping around and completely full of it – full of great things, too,  like love, compassion and tremendous insight. But I don’t want to blow his cover, so let’s not get into that hippie shit. We were here to WIN!

I say “we” in solidarity with the fat guys who sit on the couch slugging beers and wolfing down chips, yelling at the TV screen and taking their team’s actions to heart. Yup, that was me, because I tied in and did a lap – one minute, 43 seconds. Not bad? Horrible! Timmy’s first lap was 43 seconds (same as mine, except for the minute). I then took a lap using my hands (and any body part, without restriction). Still slower than Timmy’s no-hands time.

But then came along a Canadian gunslinger with a molester mustache (which he finally shaved, much to everyone’s displeasure – it was fun laughing at him, while telling him it looked good): Sonnie Trotter. Chicks send him naked pictures of themselves. He tied in, listened dutifully to the rules (he’s Canadian, after all), and smoked it: 32 seconds. 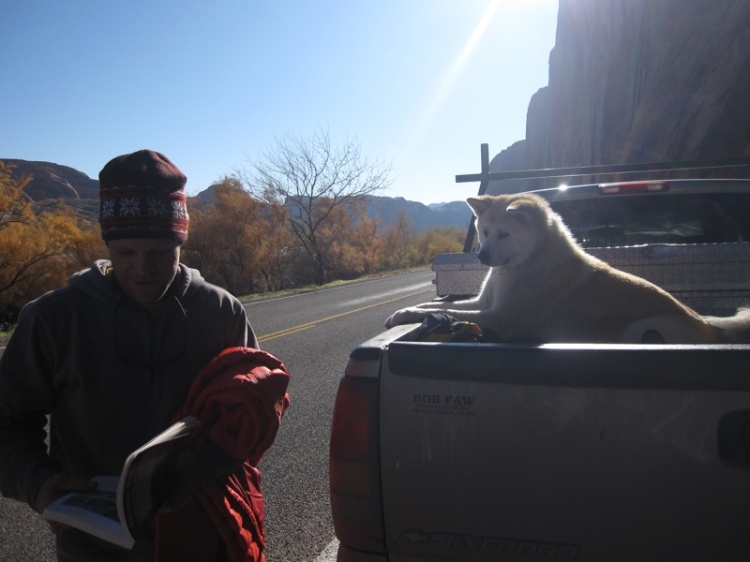 Someone immediately belted out the rallying call seen on T-shirts and bumper stickers coast-to-coast: “These Colors Don’t Run!” And so a handful of ‘Mericans stepped up to run. Lynn Hill won the women’s division, but, unlike her real-life climbing, didn’t beat all the men. Wilford put a sock on his head and gave it a valiant effort. Bean hucked an impressive lap. I think Gilmore tried, and Mikey Schaefer, too. Colin was too scared. Still, nobody beat the Canuck.

And so Timmy sucked it up – I mean, we ain’t gonna lose to no pinko commie country that does things like prioritizing health care over corporate profits, and doesn’t go on unprovoked bombing sprees around the globe. Sissies!

The outcome was never in doubt, aside from a wobbly moment that had him swaying double-time backwards and wildly correcting forward with a head touch onto the slab. He crushed. We won! Timmy: 24 seconds.

Sonnie stepped up as all fell silent. Tension locked-in every man, woman, and child who witnessed that moment on Wall Street. Sonnie’s unwavering focus could not be broken, not even wavered by an 18-wheeler speeding past, cloaking us in dust and diesel exhaust. The unflappable Trotter flew up the lower crux, used his two elbows (one left, one right, I believe) and one penis near the mid-point, and tagged the anchors: 23 seconds. The crowd stood in stunned silence.

Timmy looked shocked. Babies cried. We could do only one thing, and so the chants began: USA, USA, USA! The sun hovered low, allowing time for just one final run, one final chance to secure American’s place in climbing history. Someone crushed an empty beer can on his skull and burped. 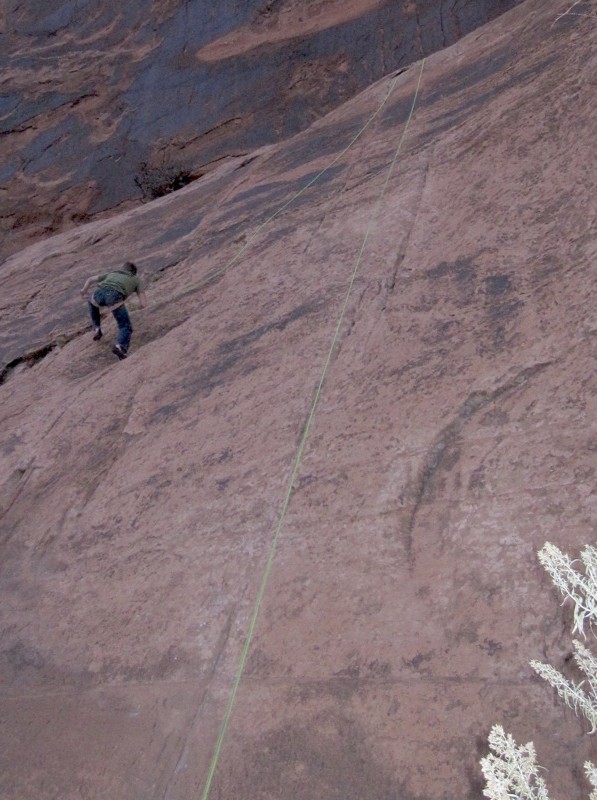 Timmy breathed deeply, focused, concentrated, while I whispered him words of motivation: You’re a technician, Timmy, one with nature, Timmy, you and motherfuckin’ nature!

The next day, while we basked in our glory, the unflappable Trotter went to Mill Creek and sent a bolted 5.13d called Prosthetics – on gear, skipping the bolts, thirty-foot runouts. That damned pinko made us all proud – I guess those colors don’t run, either. Or maybe they do, in certain times. I thought about that for a second and chugged another beer.

4 thoughts on “No Hands, Two Elbows, One Head, and a Penis or Boob”