Margs for Thanksgiving? But that was wine and turkey, right? Wrong! It’s a little known fact that margaritas played a huge role in that peaceful day. Before he went bad Christopher Columbus came in peace on the Mayflower and, upon landing at Portland Rock, was greeted with a nice marg – on the rocks, with salt. How? Because some of those Native Americans were actually Mexicans, but Columbus, being ignorant like a bellowing mouthbreather at a right-wing rally (thus lending the only existing evidence disputing Darwinism and evolution in favor of the ironically termed “Intelligent Design”), figured they were all the same. Sadly, this got buried in the historical record.

Anyway, the margs on that day were basic. They were simple people. They didn’t have Herradura, or even Corralejo Blanco (the tequila of my last marg recipe post – a damn good marg) back then, but they had Sauza Hornitos (reposado) and Minute-Maid Limeade mix, which comprise the key ingredients in my basic-level marg, too. And so in the spirit of the holiday, this week’s marg post is the baseline marg. 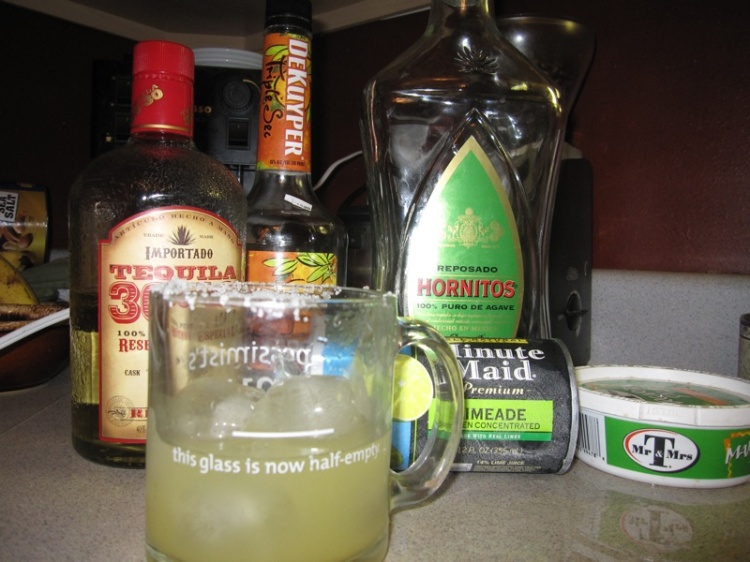 No swill margs made with nasty-ass sours mix and rot-gut Juarez tequila. At the same time, I am a climber, which means I’m also cheap. But life is all about balance, is it not? It’s a dance, it’s a beautiful…oh, wait. Margs. Hornitos is great marg tequila. Not too expensive, not good enough for sipping, but damn good for margs. A great value, too – probably $3-5/more per liter bottle than Cuervo Gold, but well worth it.

As a rule, never drop below Cuervo Gold tequila. It can make an OK marg for cheap, but, really, your low-end standard should be a little higher. Granted, we are in a recession, but just how much value do you place on true happiness?

Do two parts tequila, one part triple sec. That’s half your marg.

I go cheap on the Triple Sec. DeKuyper, Hiram Walker, whatever. On special occasions – say, special episode of Cops on TV – I go big and use Cointreau, but it’s way pricey.

First, a rule: Never use sours mix. That stuff blows. If desperate, you’re better off with some pre-bottled mix (it’s nasty in comparison, but Freshie’s and Cuervo make half-decent mixes). So, if you aren’t using fresh limes and simple syrup (see my last post), then the best mix isn’t a “marg mix” at all: it’s Minute Maid frozen concentrate Limeade mix. Don’t go generic on this one – get the Minute Maid. Go big. It’s worth the extra 50 cents. BUT – and this is key – don’t follow the on-label instructions. Here’s your correct Marg Mix Ratio (learned years ago from my friends at Ed’s Cantina, who make great margs – which is important to note, because you can’t always trust the margs at restaurants, as some use sours mix and rank swill tequila; but not Ed’s):

There, that’s half your marg. The other half is alcohol, which is a given.

Half tequila, half mix.

Think of it in threes – each part (alcohol and mix) comprises three parts.

3. Shake it all together.

I know I said this last time, but it’s worth repeating, especially since we’re just getting started. A couple of things to remember, for the uninitiated:

-Oh yeah – I shouldn’t have to state this, but – no umbrella.