Before the Cerro Torre drama erupted, I was in my local Estes Park Public Library, renewing my library card. It’d been awhile since I’d been in and they have a new, modernized system. Of the various institutions struggling to adapt to the e-era, libraries probably have a lot to consider. People still read (fortunately), still want information, and libraries need to remain relevant in the internet age. Of course they still house mostly books, and I love libraries, and I like funding them with my taxes. I know, call me a “socialist” – er, maybe not here, as there’s probably minimal overlap between Fox News viewers and readers of this blog.

Which somehow reminds me of a great article in The Onion. I don’t know how they do it every week. Then again, given the charade of American politics and pop culture, they’ve got an eternal source of material. Hell, half of it mocks itself, doesn’t even need satirizing. One of their recent articles especially cracked me up: “GOP Completely Fixes Economy By Canceling Funding For NPR.” 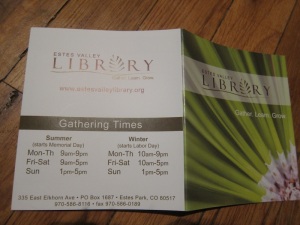 Back on track: So the woman handed me my new library card, along with a nice little informational pamphlet, and, in her indoor voice, mentioned their “Gathering Times.” I’m pretty sure it was only in my head that I barked, in my Kenny Powers outdoor voice [about 12 seconds into the below video], What the fuck’s a gathering times?! “Oh,” she said, lowering her indoor voice to a whisper. “The hours that we’re open.”

Now wait a second. If libraries are places of words, which they are, and ostensibly intelligent and well chosen words, used to convey meaning, then WTF are they talking about? Furthermore, gatherings happen, by definition, in groups. Groups aren’t quiet. Libraries are supposed to be quiet.

Besides, language evolves. For example, I can imagine two new terms emerging from the recent Cerro Torre events (if you’ve been living in a cave or if you have a life, and don’t know what I’m talking about, click here for my take on it – I’ll try to post an audio version of it soon, since I’ve been playing with audio; Colin Haley wrote a great post, as did BJ Sbarra in his short & sweet “Cerro Torre for Dummies“; there’s also lots of uninformed garbage out there, stuffed with revisionist history and blatant inaccuracies):

• To “Maestri” something could mean to make a mess of a place. Before blasting me with hate mail, remember that, whether you agree with the bolt chopping or not, Maestri trashed Cerro Torre. This is indisputable. A freakin’ 300-pound lawnmower engine bolted to the flanks of the most beautiful spire in the world, hundreds of bolts littered near perfect cracks, thousand of feet of fixed rope, etc. Usage example: “Man, those dillweeds who made the ‘Sport Park’ in Boulder Canyon totally Maestri’d that joint.”

• To “KennedyKruk” something could mean to try to clean said mess. Say you’re in a Himalayan basecamp, which are all too often litter piles (side note: I have never understood how people can go to these gorgeous places, claiming to be drawn by their beauty, and then trash them). Usage example: “Man, this is bullshit, how can people do this? I’m gonna get a garbage bag and KennedyKruk this mess.”

Regardless, words have meanings, and, my above tangents aside, we should use them in appropriate relevance to our topics. Some of the language used with this Cerro Torre fiasco is absurd. It’s fine to care about things, it really is. Climbing included. But let’s keep some perspective, for fuck’s sake.

Some pro-chopping people have used the Berlin Wall analogy, noting that we often tear down historical wrongs, and that merely being “historical” doesn’t make something sacred (I agree). But where does an analogy go too far? If you’re going to use this particular comparison, for example, I think you need to make abundantly clear that it’s just an example, and that you’re not comparing bolts on a mountain to a murderous regime, of course.

A usage that makes me cringe is the “rape” of Cerro Torre. I agree that Maestri’s actions were atrocious (within the world of those of us who care about climbing and care about the mountains). Maybe I cringe at this because I’ve used this term myself in the past. But I won’t anymore. It’s wrong.

As the inimitable “Chewtoy” wrote on an Alpinist thread:

“How do you ‘rape’ a mountain?

Do have a wife, daughter, mother?

Do you read the news?

Do you know what goes on around the world to our sisters?

Can’t we have a discussion about the culture of climbing without making grandiose comparisons?”

Speaking of which, a widely-read Italian blog post, which I found fairly absurd, was actually titled “Taliban on Cerro Torre.” Taliban?! The Taliban butcher people, stone-to-death and mutilate women, and commit horrific human rights violations. Have you lost your mind? We’re talking about bolts on a mountain here. Again, it’s fine to care, it’s good to care. It’s fine if you think the Compressor Route shouldn’t have been chopped, and to argue your point. But goddamn, let’s keep some perspective.

In observing the responses to this whole fiasco over the last month+, I think that irrational language often works against those who use it. It makes them look out-of-touch with reality, makes them easy to dismiss.

Some Onion-worthy irony: Some folks have been calling the chopping “so American.” Jason is Canadian. (Not to mention the dubious issue of blaming actions you don’t like on someone’s nationality, or of holding Hayden responsible for the imperialism of George Bush, among others). I hear ya, though: Yeah, yeah, whatever dude, Canadian, ‘Merican, same thing. So fucking American.

Back to something easier: Before this Cerro Torre deal blew up, I’d been thinking I might have a word with the folks at my local library. Maybe suggest, to be excessively wordy, that they go with “Open Hours.” Or, to be even more excessively wordy, “Hours of Operation.” Either would correctly convey the intended meaning (as would the simple “Hours”). But “Gathering Times?” Rather than people coming to read books, my local library might find itself faced with a marauding band of twirling hippies holding a patouli-oil drum circle in their lobby. They should be more careful.

But come to think of it, compared to this Cerro Torre drama, a little gathering time sounds pretty nice right now. Maybe that’s what the librarian actually meant.

use my first initial and last name, all one string, no spaces, @yahoo.com
Loading Comments...