I began work on my book in spring 2012, after the Compressor Route de-bolting controversy. On a broad level, I’d gained a glimpse into Cerro Torre’s complex and layered history during my dozen years as an editor for the American Alpine Journal. On a personal level, I’d grown familiar with the spectacular mountain in January 2007, during my climb with Colin Haley. But once I began my book research, I became intrigued by how the intertwined stories of Cerro Torre — this wholly uncaring, inanimate object – seemed to reflect the best and worst of human ambition, and how often our actions are fueled by the power of belief. My notes and threads related to the main stories could fill several volumes.

By the time I finished, I’d conducted in-person interviews in seven different countries, researched original documents dating back to the 1950s, and worked harder than I have at anything in my life. The final manuscript is 77,000 words, which is on the short end for non-fiction books. My first draft was almost double that, but ultimately I think the book works better at this tighter length. Most of the chapters are short, which I like for pacing. The final page count, however, is 400, due to the appendices, my 256-entry selected bibliography, and the 150 photos, including archival shots never before published. The book opens with a sixteen-page color gallery of the mountain from different angles and in different moods, and the middle has another sixteen-page color gallery.

In terms of genre or category, I’d call the book narrative nonfiction. I blend reporting and in-depth research with first-person storytelling as I try to unravel and understand some of Cerro Torre’s mysteries.

Check out the Table of Contents page, along with the inside jacket flap copy:

At the wind-scoured southern tip of Argentina, between the vast ice cap and the rolling estepas of Patagonia, rises a 10,262-foot tower of ice and rock named Cerro Torre. Considered by many the most beautiful and compelling mountain in the world, it draws the finest and most devoted technical alpinists from around the globe. Reinhold Messner, the greatest mountaineer in history, called it “a shriek turned to stone.”
But controversy has swirled around Cerro Torre since 1959, when Italian climber Cesare Maestri claimed its first ascent. His partner died on the descent, and generations of world-class climbers attempting to retrace his route have found only contradictions. In 1970, enraged by the doubts and obsessed with proving his success, Maestri used a gasoline-powered air compressor to hammer hundreds of bolts into Cerro Torre’s flanks, spaced to be used as ladders. The Compressor Route became one of the most contentious routes in the climbing world — and, in the decades that followed, it also became the most popular route on the mountain. In 2012, when two young, talented, and idealistic climbers, Hayden Kennedy and Jason Kruk, removed many of Maestri’s bolts, the controversy erupted anew. What role should equipment play in the accomplishments of climbers? Who has the right to alter a route, or a mountain? What is the impact of history on our ethics in the mountains? And, most fundamentally, what is the point of alpinism: the summit or the climb? This chronicle of hubris, heroism, principle, and epic journeys offers a glimpse into the human condition, and explores reasons why some pursue extreme endeavors that at face value have no worth.

In 2015, The Tower won the nonfiction outdoor literature categories of the Banff Mountain Book Awards and the National Outdoor Book Awards. 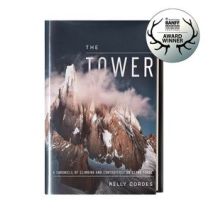 “Pride, ambition, achievement, and the weight of a person’s word are all entangled – and elegantly untangled – in The Tower, as it tells the story of climbing Cerro Torre, one of the most iconic mountains in the world both fifty years ago and in the present day. Cordes’s impeccable research and journalistic approach provide a comprehensive history never before tackled with such thoroughness and precision.” – Majka Burhardt, Banff Book Jury

“Cordes parlays his intimate understanding of the mountain into a coherent and fascinating narrative. More than just history, The Tower is also fine mountain literature, written with uncommon finesse: a story about a mountain, about those who have endeavored to climb it, and about the secrets hidden in its mists.” – NOBA

6 thoughts on “About My Book”