• Learned a new term at Thanksgiving: “Meat Sweats.” The Caldwells hosted a great dinner, and after stuffing ourselves to discomfort, our friend Patrick expanded our vocabulary. I love learning a term that I didn’t know I knew.

Patrick enlightening us at Thanksgiving.

• Had the immense honor of interviewing Tom Hornbein a couple of weeks ago, for an oral history project organized by the Estes Park Museum and Estes Valley Library. I admire Tom, and can only hope to age like he has – he’s 82, still gets out hiking and climbing, is so insightful, and so damned sharp. Impressive man. He also wrote one of my favorite climbing literature passages, in his book Everest: The West Ridge. He describes the view from their brutal, unplanned bivy at 28,000 feet on their descent from the FA of the West Ridge, and first traverse of the peak, back in 1963:

“The night was overpoweringly empty. Stars shed cold, unshimmering light. The heat lightning dancing along the plains spoke of a world of warmth and flatness. The black silhouette of Lhotse lurked half-sensed, half-seen, still below. Only the ridge we were on rose higher, disappearing into the night, a last lonely outpost of the world.”

Tom Hornbein and me after our interview.

• Once again, on Black Friday I did not buying a goddamned thing. I do not buy the religion of mindless consumption that’s become a defining American value; never have, it’s a doomed road, there must be a better way. We’re all part of the problem, solutions aren’t easy, but the Black Friday madness represents our very worst. Better: get outside, walk, climb, breathe, spend time alone or with loved ones, give something away.

• Instead, on Saturday I tried to register to be a bone marrow and stem cell donor with Be the Match. It’s free and incredibly easy to do, though their health history form dq’d me (hardware in my spine), so I made a financial donation. It’s such an important program, please check it out. So easy, and life saving. I went there with thoughts of my friend Kevin Landolt. He’s a climber, skier, and a fine young man, 24 years old and with a very aggressive form of leukemia. I admire his honesty and courage – read some of his blog posts, they’re intense and extraordinary– facing death isn’t a bright and cheery thing, it turns out – and I wish him all the best the world has to offer. Our health, our friends, our families, our ability to enjoy being outside and doing things we love are what we should be thankful for. Fuck Black Friday. Register. Help. Those are true gifts.

• November has been fantastic in Estes Park, and Colorado in general. Rock climbing one day, ice up high the next. A few photos scattered below.

• Obviously (given my Nov 5 post), I’m psyched on the election. But I’m glad it’s over, so  that we can go back to mere congressional bickering, and even less-important bickering on Facebook. Along those lines, I have to chuckle at my friend Rich’s directness – we’re about as far apart politically as possible, and the guy certainly wouldn’t be accused of Tasty Talking. I think that all of us who cared about the election were getting worn thin. But I liked one of his Facebook posts not only for its succinctness (and his lack of filter), but because it’s how I’ve sometimes felt like replying to moronic online comments (i.e. The ones I disagree with). The blessing and the curse of the internet: No barrier to entry.

Rich began: “Because of the First Amendment I can say this: If you don’t like my political posts…blow me.”

• For all our dysfunction, we live in a pretty damn good country. Let the troglodytes in Texas secede.

Whiners. Especially after they shat-us Bush. To borrow from Rich, hey Texas…

• My cankle is coming along – still making progress, pretty cool, though sometimes still a bummer. I’m trying. Saved some money, kicked down and “bought the fucking ticket” (worthy story behind that phrase…coming soon, someday) to Argentina. Who knows if I’ll be able to climb like I want to or not, so we’re keeping things flexible, but Patagonia’s a good hang regardless. Side note: cabin for rent in Estes Park during the glorious months, January and February. 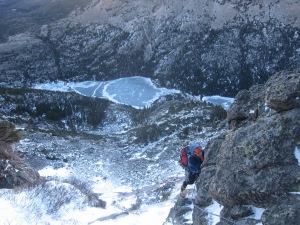 • Getting older blows in many ways. In others it’s great – if you’re smart enough to realize that you’re not smart enough, you’ll continue to learn and grow. Gain wisdom. I love this sentiment from Muhammad Ali: “A man who views the world the same at 50 as he did at 20 has wasted 30 years of his life.”

• I hope you’ve all recovered from the meat sweats, and that you’re doing valuable things this holiday season, every season, and every day. At this devilspawn time of year, when unabashed consumerism reigns supreme, remember to remember the important things. If you want somewhere to start, read this – it’s Kevin’s latest post. 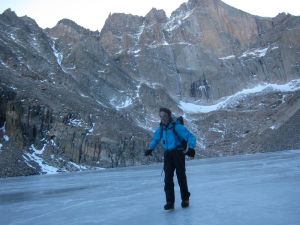 Weasel One thinking light thoughts after a resounding “crrrrack!” on Chasm Lake.

8 thoughts on “Notes from November”