Young climber at the crag: “Hey old man – nice haircut, by the way – you happen to know what the rack is for this pitch?”

Old man (me): “Well, I seem to recall…I seem to recall that…it was July 2004. Pakistan. Trango Valley. Me and Josh started up, when – BLAM! – on the second pitch we dropped a bunch of our cams. And – hey! Listen-up now, whipper-snapper, it’s time for you to man-up!” 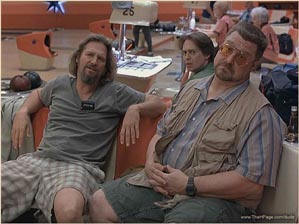 I’ll spare you the rest, as I’m starting to become like Walter Sobchak in The Big Lebowski, blathering on about ‘Nam.

“Ever hear of a little something called Great Trango Tower, Little Larry?”

So I’m in Pakistan right now, trying to relive the past (“Three-thousand years of beautiful tradition, from Moses to Sandy Koufax, you’re god-damned right I’m livin’ in the fuckin’ past!”) – ha; actually I’m trying to create some new memories – and, thanks to the interwebs I can set this to post while I’m out of contact. Side note: It’s so nice to be unplugged for awhile.

Anyway, around this time, my good friend Matt Samet’s Climbing Dictionary (official title) – a.k.a. the Sicktionary (the better, underground title) – just came out. Matt’s a great writer and editor, and edited several of my features into readable works (no small task) while he was at Rock and Ice and Climbing magazines. So, for one, I’m giving a shameless plug (which I generally avoid, but fuck it, it’s my blog and I like the book): Check out the Sicktionary, it’s fun and informative, with 670 terms and climber-isms, and 130 illustrations by the super-talented Mike Tea to help ring-home the points. I latched onto it in large part because I hear so many fun, funny, absurd and cliché terms in my work with the AAJ – see below, a clip from the online version, where you can submit new terms: 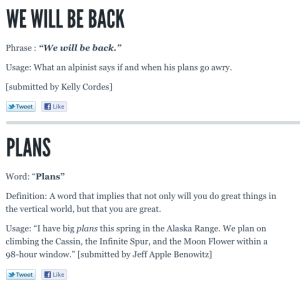 Also, since I blather incessantly (“Just what in god’s holy name are you blathering about?”), Matt picked-up some of my terms for the book. Pasted below are a couple that I helped with. Fun stuff. OK, I’m supposed to be in Pakistan, trying to send the sickgnar. Better get back at it.

Disaster style adv, n : Alpine style taken to a near-lethal extreme, as in going so fast-and-light that you must succeed, lacking the provisions for an extended bivouac or epic retreat.

*Origin: The Colorado climber Kelly Cordes and his friend Brent Armstrong invented the term to mean,says Cordes, “risk-accepted climbing, like going for it, punching it without the 10 Essentials and what-the-fuck-not.” The epitome is Cordes and Josh Wharton’s July 2004 first ascent of Azeem Ridge (VII 5.11 R/X M6 A2), the 7,400-foot Southwest Ridge of Pakistan’s Great Trango Tower: The world’s longest alpine rock climb. Cordes and Wharton took five days, running out of water after day two; they carried only 20 cams (spilling six atop pitch two) and some nuts, a few pitons, a lead and a tag line, lightweight sleeping bags, rock shoes, approach sneakers, aluminum crampons, one ice axe, and a modified (sawed-off) third tool. The parched climbers survived by slurping at drips and snow patches with plastic straws, only coming to a (glacial) water source after epic diagonalling rappels on the descent. As a philosophy, disaster style can also apply to life. See also, safety-fifth climbing.

“Safety-fifth” climbing phr : Versus the “safety-first” mentality, in which every attempt is made to reduce risk, “safety-fifth” (aka “safety-third”) sidesteps considerations of risk in pursuit of the larger goal; that is, you’re not climbing with deliberate recklessness, but also don’t base every decision on personal longevity.

*Origin: The Coloradan Josh Wharton uses this term, though isn’t certain he invented it. Kelly Cordes recalls first hearing it from Wharton in 2004 a week after their disaster style FA of Azeem Ridge. “We were bivied in this nasty gully on Nameless Tower,” says Cordes, “exposed to some rockfall, not well sheltered. In the night all this rockfall comes flying down and scared the f–k out of me.” Though Cordes woke up jittery, wondering if they should relocate, Wharton merely rolled over, mumbled “Safety fifth,” and dropped back to sleep.