I had a proposition. I’d readied my pitch to the surgeons at the Steadman Clinic in Vail, where, by the way, I’ve received hands-down the best medical treatment in my storied surgical career, from the people in the lobby to the nurses and assistants to the surgeons. Don’t know how they do it, but they do. This was two-plus weeks ago, and Dr. Hackett was about to trim my torn knee meniscus, while Dr. Clanton was about to remove a good chunk of the hardware store in my lower leg and clean-out scar tissue, bone spurs, and other such nastiness. Made sense to do ‘em at the same time, since it’s all on the same leg and the recoveries are similar. Plus, I’m not quite back to climbing yet from my massive shoulder surgery in December, and so we’d time it all just right – next week, I’ll start walking again (been on crutches for this short time since the surgeries), and in a couple of weeks I’ll start climbing again. Perfect. Rehab is coming along phenomenally well – if I do one thing well in life, besides fucking myself up, I do rehab. 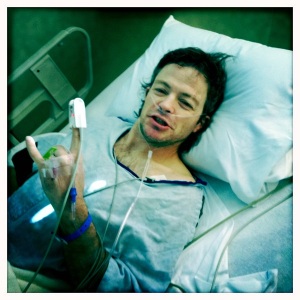 Psyched after successful surgeries, and the news that I should be back at it soon.

This recent round made six surgeries in just over a year. Enough. Anyway, one of the super cool things they were doing is a new-ish treatment called mesenchymal stem cell transplant. Something like that. They’d go into my hip with a syringe (after I was asleep) and extract stem cells from my bone marrow, and, after doing some centrifuge-like procedure, inject them into the then-empty screw holes in my leg and the damaged cartilage in my cankle. Apparently these stem cells show great promise to speed recovery and maybe even grow new cartilage where it typically doesn’t regenerate. The stem cells take on the characteristics of the targeted cells, as I understand it, and can thus repair damaged tissue.

So I got to thinking.

“Hey doc,” I said to Clanton before they put me under, “I know this probably isn’t an approved use, but I got a twenty with your name on it if you take some of those stem cells and inject ‘em into my brain.” Everybody in the room laughed. They thought I was joking. I lowered my voice to a whisper: “OK, make it fifty.”

Then they put me to sleep.

My cankle. The "groove" is where a loose bone chunk, probably grinding into my foot whenever I moved, had worn through my cartilage; the stem cells could (we hope) help repair the damage. Dr. Clanton also cleaned-out a proverbial shitton of scar tissue, some of which had trapped a major nerve, and he removed two plates and 12 screws. Photo: Dr. Tom Hackett