Yes, another autobiographical post. I know, it’s all about me. But this is a blog, after all, so what did you expect?

Friends are coming back from Alaska, some are still up there, we’re about to send the AAJ to print (and I’ll resume writing more, especially since I’ve got some cool projects upcoming — more soon), it’s that time of year that makes me think of big alpine trips, makes me long for them. Something about the whole experience, the travel, the high mountain air, otherworldly exposure and the greatest friendships. Thinking back to the 15 or so such trips I’ve done around the world, those things stand out. Summits don’t. As I type this and scan my memory, I can recall some of the climbing, and I’m happy to have been to some amazing summits, but, holy shit, it’s about so much more.

At least it is to me. Not everybody gets it, though. Including this guy. [Story written after my 2003 Alaska trip with Jonny Copp.]

He glanced at the mountaineering display, then started stabbing questions at the ranger on duty. How many summit? How many die? How many try? He’d seen Vertical Limit. 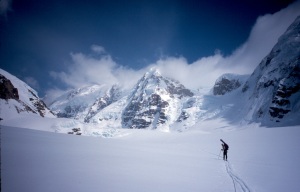 Jonny Copp, skiing out of the East Fork the day after our route, "Going Monk."

I could hear him careen around the ranger’s station as I sat peacefully in a chair looking through topos. From the corner of my eye I saw him scan the room herky-jerky style. He had no time to waste in Talkeetna, Alaska, population 300 and hot stop on the summer tour bus tour. I felt his eyes zero in on me. I buried my head farther into the topos, but those heavy breaths were soon bearing down on me like a steam train.

I must not look intimidating enough.

He stood way too close to my chair, catching his wind. No introduction, nothing but those two words, question mark-slash-exclamation point. His cheeks flushed so red they looked as if they could explode; his gut pushed so hard on his shirt I feared it might burst through and crush me.

“You summit?” he blurted between breaths.

Goddamnit, three weeks in my happy place and now this….What he meant, of course, was had I summited “Mt. McKinley,” obviously the only mountain in the Alaska Range. Jonny and I had summitted, via a new route on a peak we’d never even heard of in the East Fork; we’d skied in 10 miles, climbed 4,300 vertical feet of technical climbing, tagged the top in a whiteout storm that lasted through the descent, I plunged into a crevasse when skiing away afterward, returned to our tent cold and soaked and trembling in fear, when Jonny handed me a PBR that he’d packed in and hidden in the snow for our return. But none of this was what the guy wanted to hear.

He panted as though he’d just run a marathon. He needed my reply now.

I thought for a second about what to say, then looked up.

His head lurched backward a bit, and the corner of his mouth dipped in synchronicity with his brow. He’d been rooked: he’d come all this way to see a real climber, and this was all he got.

“Pthhhh,” he snorted and waddled away.