When it comes to training, I can get obsessive. The mentality helps even now – especially now – because I want to recover my leg, and also because I have an opportunity to get stronger fingers. Pathetic, I know, but it’s good to focus, even on little things. It helps, and not just for climbing. After never doing much dedicated hangboard training, I now have one in all three rooms of my cabin – three hangboards in 580 square feet. Must be some kind of record. I use my two Metolius boards 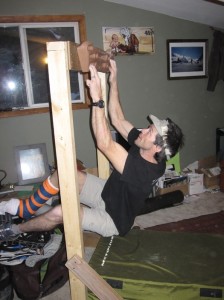 regularly – the guys there are awesome, they’re all climbers, they make great gear and have supported me for a long time. Also, after my accident Josh sent me a Moon Board with a “Get well soon, and get strong” note. How cool. It’s nice to have some variety in my training apparatuses (apparati? Nope.). There are two sets of holds on the Moon that are tiny. Like half of a finger pad deep. In their numbering scheme, which makes recording your workouts convenient, these are holds #4 and #3. #4 is just ridiculous. I’ve been working to stick #3 – “sticking it” meaning hanging unassisted, with both hands (fingertips), for six seconds – in a three-finger open grip. I can do it in full four-finger crimp, but it’s super tweaky on my tendons. My hard-rock climbing buddies all say the open grip is the ticket, as do most training sites. So, I’d been taking weight off for progress with open three-finger #3, since I can’t do it. I use a pulley system to make me lighter – minus 15 pounds for awhile as my times went up, then minus 7.5 pounds, then, viola! Hung it the other day, at full body weight, for 5.8 seconds.

Balls! Only 0.2 off, aaaaarrrggg! So close. Funny how something so short can be such a battle. Of course we could rationalize, “What’s 0.2 seconds, anyway?” True. But fuck that. Nobody who gets top results out of their training thinks that way.

Concrete, quantifiable goals can be good. Often this means using numbers. Alpinism is typically the complete opposite – conditions vary dramatically, ratings aren’t solidified, you’re often on unclimbed terrain anyway, the crap you’re climbing feels un-ratable, and so many factors vary so greatly that it doesn’t allow for objective comparison. Fine by me. I like making up my own rules. I can convince myself that I’m not so bad. But in training, quantifiable measurements – so long as you don’t get too attached to them, and remember that pushing yourself is the real key to improvement – can help drive you. I use numbers in training to prepare for the times when numbers mean nothing.

As with most things in life, I find that a balance works well. Sometimes numbers, sometimes not.

For example, I have a training book/file (more scraps of paper than anything organized, but I’m working on it…) in which I record some of my times on the trail, and various solos, etc. One-hour 52 minutes, trailhead to summit, North Ridge of Spearhead. Five minutes from my shoe-up-spot to top-out on White Whale; 29-something road bike time trail from the end of my driveway to Deer Junction, a lung-busting uphill (I forgot my exact time after Tommy, that bastard, beat me, and so I took my ball and went home). Each time I go out, I can measure myself against my time. I’ll have to adjust now, and will likely never be that fast on the trail again due to my ankle/leg. Some of these things are obviously just personal trials (uh, where’s the end of your driveway, dude?), and some of these things would be a cruise for some people, more difficult for others. That doesn’t matter, and would miss the point: the numbers give me a quantifiable way to push myself. The watch doesn’t lie, and lets me know if I’m progressing or I’m lame.

On other things, we set more general goals. Jonny Copp and I did this thing in RMNP that we called the Triple Lindy, in a little under 23 hours – we just wanted to do it, hopefully in a day. A couple of months earlier, we’d done a new route in Alaska, and though I remember the approximate times, the goal was to do the damn thing in good style. Period.

As for comparing yourself to others, I suppose that can be good and bad. All high on my improving hangboard strength (now, if I can only learn to use my feet and move my body correctly, I might climb well), the other day I got to surfing the web. It started with reading Will Gadd’s blog, which has lots of training thoughts, and which I always enjoy. I can get to geeking out on this stuff, and I ended up on “Beast Skills: Old School Bodyweight Strength.” In one of the guy’s posts, he had this great line: “Injuries are great. Every time I get injured I learn something.” Amen, brother. 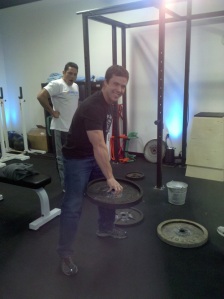 Then I realized how weak I am. Holy cow check out this pic that I lifted from their site (sorry guys, don’t squash my head like an eggplant in your hand), of a dude doing a “plate grab.” Sweetbabyjesus, man! I’d drop that freakin’ plate so fast my toes would be like my leg. Pretty cool. The super musclehead strongman guys all, apparently, train grip strength. “There has never been a strong man with weak hands,” they say, and I imagine it’s true – it’s gotta be the weak link when you can lift a tractor but you have to grab it first. I want to lift a tractor. I’d heard of these feats where dudes can fold a penny between their fingers, and we see them on TV pulling monster trucks with their teeth and stuff. Not the same specific thing we train on a hangboard, but pretty wild, and no less stupid than climbing. It’s fun how you can get into something.

While reading that Beast page, I regained some self-given manly points after watching people doing muscle-ups by relying on this huge swing – OK, nevermind that the vids were of people getting their first muscle-ups (congrats guys!), and I guess the swing is a good way to learn ‘em. I don’t know, I just tried them a few times a few years back until I could do them. Regardless, I can’t do a plate grab but I think I got ‘em here. Even with crutches, in a cast (video below). When you’re a gimp, you take the little victories when you can. At the BRC, about a month after surgery, I got seven in a row (probably because I lost weight after surgery). I rarely do them, but should, because I want to get 10. Ten’s a good number. Not important, not essential to my climbing, but sometimes the little things drive the bigger things, and numbers can help.

Like gaining that additional 0.2 seconds on hold #3, damn it. OK, time to start my warm-up.

7 thoughts on “Training by the Numbers”