Damn, been busier than a one-legged man in a butt-kicking contest. Er, that hits a little close to home in my gimped-up state. I’m far more PC than that, as some people do have only one leg – well, like me for example. Maybe the guys I’m trying to hunt down to wrap-up the Alaska section of the next AAJ will read this and have sympathy on me. Why the hell can’t they answer my emails within, like, a day or two? Oh, wait, maybe they aren’t sitting in front of a computer and are actually out 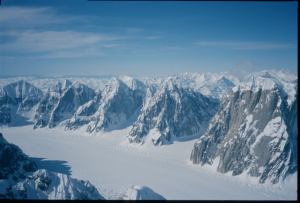 climbing. Bastards. I’m even trying to make it super easy on them, having gathered info on their routes, and sending photos with what I think are their lines drawn in, with options labeled A, B, C at various junctions. They can just email me back – whenever they’re done wasting their lives going climbing, of course – and tell me where their climb went. I feel like Walter Sobchek in the Big Lebowski, when he and the Dude go to Little Larry’s house (flunkin’ social studies, little brat), and Walter presents this school assignment he found in Dude’s car and asks: “Is this your homework, Larry? Is this your homework, Larry?”

Granted, it doesn’t matter, since climbing doesn’t really matter, and thus – “Ever thus to deadbeats, Lebowski” – in an attempt to diversify myself, a couple weekends ago I made an about-face from my pathetically one-dimensional life and went to Lebowski Fest in L.A. (the city of angels, though I didn’t find it to be that exactly). It was me, my brother-in-law, Phil, a few of his friends, and a couple thousand other losers fellow connoisseurs of artistry through cinema.

Honestly, I worried that going to the Fest might ruin it for me. Kind of like returning to a route you already onsighted – why wreck it? I’m all about enabling success through lowered expectations.

So with caution I crutched toward Lebowski Fest, feeling shy and even reclusive. And thus it came as a marvelous surprise when, at dinner beforehand with Phil and his friends, his buddy’s wife, M, showered me with praise after Phil mentioned something about my climbing. Shit, my best friends don’t even care about what I climbed, I thought to myself, This is pretty sweet. She’d seen me gimp-in with my Jimmy crutches – yes, I’ve been called “Jimmy,” the character from South Park (friends like these, huh Gary?) – and she figured I had a real handicap. And I climbed mountains.

“You’re sooo brave,” she said, softly. I glanced over my shoulder, puzzled. Only the five-foot-tall waitress – we were at a Korean BBQ – stood behind me. So I went with it. A guy like me doesn’t get this everyday.

“Yeah,” I said, feigning nonchalance, reclining and refilling my beer. “Pretty much.”

“What you do is nothing short of inspiring!” M said. Phil looked at me, back at her, at me again and snorted.

“Well,” I continued, furrowing my brow, looking side-to-side and then leaning forward, “I think that if you aren’t living on the edge, you’re taking up too much space.”

An hour and multiple beers – oat sodas – later, we headed for the actual Fest, and, while crutching along, I heard M giving Phil shit. Turns out she hadn’t seen my cast when I gimped-in, just my Jimmy crutches, and now realized that I wasn’t disabled at all (apparently nothing else in my personality tipped her off), but just some climbing bum who’d fucked himself up. And, somehow, this was Phil’s fault.

“Well what did you think when I was calling him a cripple earlier, then?” Phil asked back, laughing.

“I thought you were just being an asshole, like you usually are,” she said.

Inside the theater, where a bunch of people in costumes reciting movie lines in unison didn’t ruin anything at all for me, we took our seats. Phil got up and brought me back a drink – “Here ya go, cripple.” M shot me a sideways glance like I wasn’t anything inspirational at all, just some goldbricker, a deadbeat climbing bum. Oh well, fair enough. It was good while it lasted. I leaned back, sipped my white Russian and waited for the movie to start.

invent excuses to avoid a task; shirk : he wasn’t goldbricking; he was really sick.

Galindo Añejo. What, an añejo for me? Well, añejo means gold – just without the brick. I provided that when I made my sister, Jill, buy the tequila. Actually, she’d texted me before my flight out, asking what tequila to buy. I explained that if they wanted something really good, like for top-shelf margs and sipping after I leave, get Herradura Reposado – but I know it’s pricey, I’ve only received it as gifts myself – and so I continued, explaining that the standard Hornitos would be just fine. Only she didn’t get to the second half of my text, flying into a frenzy at the first half. She called Phil and went off, “He used to live in a fucking chicken coop and he wants us to buy him a $55 bottle of tequila?! No fucking way! That deadbeat!”

At the liquor store, they gently pointed her to a fine alternative – a lesser-known, smaller brand, that they insisted was comparable and far less expensive: Galindo. Absolutely superb, made some of the best margs I’ve had. I hope I can find it around here. The añejo ran about $40, which still puts it generally out of my price range, but it was damn good stuff and, well, if, like, you know, like, you aren’t buying, man, you can still be pivy to the good shit…

Since this is good stuff, you know this by now: fresh-squeezed limes and simple syrup. For each part of lime juice, do maybe ¾ part simple syrup. You make simple syrup by mixing one part water with one part sugar, stirring and heating gently until dissolved. Don’t boil it. Then put the heated pot inside a larger pot of cold water, to cool it down while you squeeze the limes.

No triple sec. Don’t need it or want it with the good stuff. About half the marg is the Galindo, the other half mix. Add a splash of OJ. Shaken, not stirred, on the rocks, with salt. The dude abides.

4 thoughts on “Inspiration — The Goldbricker Marg”