Today is Jonny Copp’s birthday. He would have been 36. I don’t know how to feel, how I should feel, how I actually feel – confused, sad, and grateful, I guess. Grateful daily, I think of him daily, even the day I sat broken in the snow in Hyalite I thought of him, thought of him with gratitude. Confused because death is such an enigma. We throw out clichés, about how the ones we lost wouldn’t want us to be sad, and in their memory we need to live to the fullest – true enough – but it also remains true that he’s gone and no rationalizing changes how much I miss him. Nothing will ever replace the sadness in his parents’ eyes, and the simple fact that they will never be the same.

Jonny on the FA of Going Monk, Mt. Andrews, AK.

And I’m confused, too, because they say time heals but it feels strange that I can now look at his picture, the one I put on my desk after the memorial but haven’t been able put away, and look at it without crying. I still pause and look into his eyes, eyes that burned with life, and still speak to him, but I don’t cry. Not as often, anyway. And I guess that means a day will come that I don’t pause and look in his eyes anymore, or speak to him, or feel indescribably moved when I look on my wall and see the painting of Jonny, as a young boy in India, that leaves me speechless. The night Kristo and I spent with his parents, John and Phyllis, in their home, looking through photo albums until the early morning hours, helped me better understand what made Jonny, Jonny, and to John and Phyllis we are forever grateful.

I want to always remember.

That’s good, because as long as I am alive, I don’t have a choice in the matter. It’s a present and it makes me smile. The people that come into our lives and have an influence, they change us. We are never the same.

Ahhh, that first time in the Black, me and Scotty, Choss Pit virgins, with him and Dylan, the morning rolls on, Jonny manning the chickeneggs and bacon (piggy, of course, always the piggy), me and Scott anxiously glancing at our watches, when suddenly Jonny leads the charge – like two speeds, baby, stop and go – and he and Dylan run from the campsite, gear clanking, Scotty and I drafting on enthusiasm, hooting and shouting bombing down the Cruise Gully, and before we know it we’re down, climb out, go down again and climb another before the buzz wears off and over beers at camp it hits us that we did more than we’d have thought on our own. And Chamonix for a month late winter, five of us piled into that tiny apartment, nonstop laughter, epics, sends, friendships, suffering through the north face of Les Droites way lost, and for some reason I most remember Jonny’s outrageous head bobs at 2 a.m. – standing on a ledge discussing where the hell to go when, his body taught to the anchor, his eyes flutter and his head and torso drift forward to chest height before rocketing back up, bolt upright, eyes wide like saucers and he busts into that laugh, which turns to a smile that stays put as his eyes close and he catches a moment’s sleep while drifting forward again, repeat, repeat, repeat… Upon arrival in Cham, the very next day we bumbled to the Frendo Spur mid-morning, climbed, raced, but missed the last tram down as Scotty D waved to us and atop the Midi station me and Jonny raided the French rescue crew’s kitchen, making cheesy

Next: Cheesy fries! And after that: uh-oh...dude, you hear footsteps? Busted!

fries, emptying their fridge, making it ours until busted and banished to the bathroom bivy. Learning to go for it with him in Alaska a month later – what the hell, made the plans at the end of Cham, why not – when I’d have been content to sit around – weather isn’t perfect, I don’t know… the Brits aghast at our trainwreck, “Look at that camp and tent! The squalor!” and we’d just laugh – and the indecisive Kahiltna hang with everyone else, except you just don’t get away with that with Jonny Copp, and somehow you don’t want to get away with that with Jonny Copp, and so we went between – and partially through – storms, we went monk – I gotta dig down, I gotta go monk (after watching Zoolander on near-constant loop in Cham, Jonny and I could communicate in Zoolander dialogue – Wharton: “Yeah, yeah, I know, I’ve been around you two together – it’s really annoying, actually”). Thanks to Jonny, we milked everything out of the trip. Later that summer, the Triple Lindy in RMNP – The Triple Lindy, but that’s impossible! The summer before he left, descending in the Park after a glorious day, talking about his Sara and my Jenna, and just how god-damned lucky and happy we were, and…

Shit. I guess I’m rambling. Even if time heals, healing brings mixed emotions. I don’t want to forget. And I sit here realizing that, well, I guess I’m not quite over the crying yet. But it’s OK. As long as I am alive, I won’t forget Jonny Copp. I couldn’t, even if I tried.

I think it’s fair to say that Jonny wouldn’t be above our drinking damn near anything to celebrate – he just wasn’t that uptight. After all, he came to the white trash party in Estes, sampled my nasty powdered-sours-mix-with-swill-tequila-marg in Alaska, we swilled wine in France, Tecate in the Black, PBR on the Kahiltna – and he’d carried one, hidden from me, all the way in to our no-sleeping-bag bivy in the East Fork, and, after Going Monk – after we descended in a whiteout and I plunged into a crevasse and he pulled me out, trembling and terrified, and we returned to the tent cold, wet, and scared, but I was happy to be there with him – he dug into the snow and handed me the best tasting PBR of my life. I think anything to celebrate Jonny will work. Maybe another way to put it is that it’s not the drink that matters, it’s who you have it with.

Fresh squeezed limes, let’s do it right. Roll them on the countertop, under your palm, softening their skins and making the juices fluid. Roll the ends, too. Squeeze with a juicer – not an automatic one, but do it by hand, it’s better that way. A good lime will yield about two ounces of juice. So, get plenty of limes.

Make simple syrup – the sweetness makes a perfect yin to the lime’s yang – with one part sugar, one part water. Maybe one cup of each, that way you have enough for a few margs. Heat gradually, stirring, but don’t boil. Cool the pot by setting it inside a pot of cold water. Do this first, so it cools while you squeeze the limes.

About one part lime juice, ¾ or so simple syrup – adjust to taste. Add a splash of OJ. 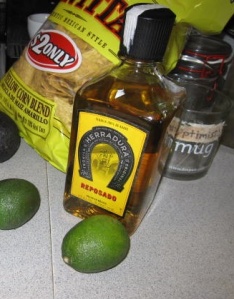 Go for the good stuff. I’m saying Herradura Reposado here. Herradura makes terrific tequila, and the reposado picks up flavors from the wood barrels where it ages, blending with the wildness of agave flavor. Real stuff, a great, honest tequila. Refined and aged, but not too much. Still has its youth, but some maturity, like it has been around and seen some things and grown stronger through experience. I also love blancos, or jovens, love their rawness. Anejos are terrific, too, like an old man sitting in a rocking chair after a wonderful life. But tonight I’m going with the reposado.

Mix equal parts mix and tequila – keep it strong. No triple sec needed here, it just detracts from the simplicity and purity of the ingredients. When it’s this good, there’s no reason to mess with it.

This is a damn fine marg. My personal favorite. But, really, it doesn’t matter. Mix this, or this, the standard, even the beergarita. Even a PBR. If you don’t drink, toast a glass of water. That part doesn’t matter. But maybe it’s a good day to remember what does matter, and to appreciate the people you love. For having them in your lives, you’ll never be the same.