Here’s one I wrote for Patagonia’s blog, The Cleanest Line, last spring. Seems fitting given that I recently finished driving (with a buddy, at least, versus the solo drive, a.k.a. “California Carpool”) through Wyoming and Montana, then flew back — hey, the plane was going anyway. Besides, I’m not going anywhere for awhile. Here goes:

On Wednesday, Scotty D called from California. A work delay had him with a few days to kill, and he had a room, a rental car and his company was paying him to sit and be bored.

Capitalizing on that human ability to rationalize nearly everything and draw simplistic stopgap lines for our problems, I figured a break would help my work. I’d fallen behind and needed rejuvenation, so Thursday night I boarded the plane on a frequent flier ticket. Free trip to Yosemite. Yes, “free.”

I emailed my friends and AAJ colleagues, John and Dougald.

“Nice, low-carbon climbing. But I’d do it in a heartbeat,” John replied. Despite his admission (and despite his being my boss), I can easily dismiss John with the undisputed trump card that our environmental crisis boils down to overpopulation. He and his wife have a kid. I have none.

That bastard has no room to talk, anyway – he drives an SUV, which, even though he claims it’s a “mini-SUV” that gets 26 mpg, makes him the devil incarnate. My car gets 40 mpg, so I am clearly a better person than Dougald. Dougald and his wife have no kids, either, also making them clearly better people than Juan. Except that John – now ‘Juan’, befitting his move to Mexico, where he doesn’t burn fossil fuels heating his house like we do – is a good person whose writing and Imax movie inspire countless people with an appreciation for nature, which might make all of us act better – an influence reaching far beyond one person. And John has a beautiful family and he and his wife raise their daughter with a mindset that could have her as part of a generation that literally saves the earth – or, more correctly, saves our ability to live in it. We’ll need it with all these people. But they’re doing a net-minus-one, which makes them champs compared to people living in Africa. Clearly better people than those people, right?

“I’ll bet 95% of people don’t even know what a carbon footprint is and don’t care,” Scotty said on the drive from the airport to Yosemite Valley. He’s probably being optimistic. We definitely need more awareness, so maybe we should do one of those expeditions that flies halfway around the world to “raise awareness” for global warming.

“Besides, the plane was coming here anyway,” he said with a half-smirk.

“As created by the demand of the passengers, like me,” I replied. In fact, the flight was packed. Most were likely traveling on business, which, it seems, we all accept as necessity. So, let me get this straight, if you’re contributing to this house-of-cards with unsustainable consumption called our economy, then the carbon doesn’t really count. I suspect some vacationers like me were on-board, too, but they might have been visiting family, which also seems OK. As for the pure vacationers (it was spring break, after all), well, as they say in the credit card commercials, you work hard, you deserve it. And I love climbing, I deserve it. Surely more than the executives at AIG, anyway. 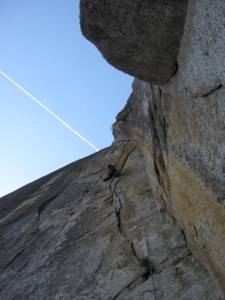 Scotty D on Red Zinger (the climb, not the airplane above), Cookie Cliff.

Besides, if I didn’t go, Cracka Boy (that’s Scott) planned to just go soloing anyway, so in a sense I may have saved his life. Then again, getting back to the population-resource thing, if Cracka splats… and, on top of it, if I didn’t fly out and he splatted, then I would, indeed, have followed the path of the righteous man. But that doesn’t seem quite right. Besides, our first day – an afternoon at Cookie Cliff – had me so in love with the world I destroy that I didn’t care about any of that shit.

Day two: Three-quarters up the first pitch of the day, hail turning to a full-on deluge soaked us and we bailed. Karma. Clearly. High carbon climbing karma. The universe does, as it turns out, revolve around me. We bailed and went for a trail run – it doesn’t get much more carbon-neutral than running. We drove to the absurdly ornate Ahwanhee™ Hotel and poached a parking spot. After an hour on the trail it was barely noon, so we had the day to kill. Marg-thirty. We’ve worked hard, we deserve it.

Back at the room, I showered, but where’s the soap? The housekeepers apparently threw away the soap – I’d used it once – and so I opened a new one. They lined the trash buckets with new plastic bags, despite our having just a couple of food wrappers in the “old” ones. Washed the sheets on our beds. Washed the towels. All totally unnecessary unless the housekeepers wanted to keep their jobs. I open my laptop. If the weather stays bad tomorrow and we can’t climb, I’ll have done enough to call this to a work trip – like everyone else on the plane – making it OK. Besides, Scotty’s on the clock.

I squeeze the limes, pour the Patron, and look at the packaging. Says right there on the box: Hecho en Mexico. I’m supporting businesses and helping people feed their families. Simple. And I’m sure the plane was coming up anyway.