Remember when you were a little kid and stuck your hand in the cookie jar when nobody was looking, or climbed towering trees at recess, or onto the roof of the school? Even if you risked getting in trouble (some overweight gym teacher yelling up from the kickball court gave a perverse joy, did it not?), or even if the cookie – or the climbing – wasn’t that good, it was still fun. There’s something to not just following the tape that makes chasing the here today, gone tomorrow, fun – even if it’s not always fun. 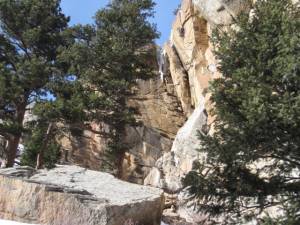 Approaching the smear, by the Rock of Ages crag, Moraine Park, RMNP.

Maybe that’s part of what I love about ice and mixed climbing. Being cold isn’t fun, being scared is kind of fun but not really though maybe it is, and the screaming barfies are pure hell. Scoring a rare gem, though? Love it. I also love what I call The Chase – finding what’s formed where, the endless theories (usually wrong) about what’s “in” based on weather patterns and rumors, the wondering if the info you got from someone else is right or if they’re keeping something from you. It’s like our own silly little version of those conspiracy-spy-chase movies.

In a weird way, it’s especially rewarding around here, where we don’t have the ice that they have in Cody, Montana, Canada, or the Northeast. Hooking my way up the typical hacked-out Colorado ice is OK, I guess, but it’s kind of like going to the gym, just in a cooler environment.

To find the good stuff, taking the tools for a walk is part of the deal. Sometimes it pays off even on classics, as I recently wrote about on Dougald MacDonald’s excellent new Colorado outdoor adventure website (which, of course, I think he should call ‘Rado MoJo – ya know, brah, I’m just putting the rad in Colorado…).

Anyway, for years I’d heard rumors of an ice and mixed climb that forms once in a blue moon out by Rock of Ages, one of the best rock climbing crags around. 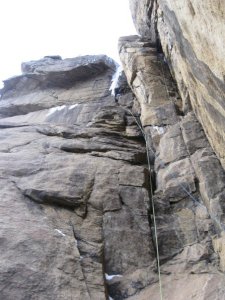 Once in a blue moon...me on the route. photo: Mark Kelly

New Year’s Eve was, in fact, a blue moon, and so my good friend and former Coop-lord Mark Kelly (he owned the land on which I squatted in the Chicken Coop for three years – a 7×11-foot shack) and I figured we should take the tools for a walk. On nothing more than a hunch, I’d done a trail-run recon a few days prior, and through the swirling snow saw this mystery smear from the trail. I’d spaced my binoculars, so couldn’t see if it was any good, and was tied up for the next couple of days. Come the 31st, I had no idea if it’d still be in, but Mark and I headed out.

The last time I’d been to Rock of Ages, ironically, was in November, as the fall disappeared and winter rolled-in right before our eyes, a blowing snowstorm from the head of the valley about to engulf Josh Thompson and I as I started up The Wasp, a hard-for-me rock route that I’d worked on a few times and wanted to send. It was literally my last opportunity, nearly to the minute, before the seasons changed. We hiked out happy, the wind chasing us toward the trailhead like a door slamming shut behind us. 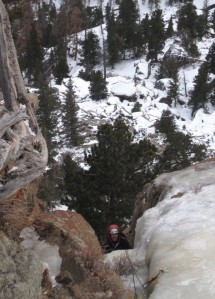 Mark Kelly topping out in the suddenly-cold-and-blustery.

Now Mark and I hoped for something entirely different, for a frozen smear to hang in there just a little longer under the wilting sun. From the trail it didn’t look good. Sunny and warm. Still, you never know until you go, and so Mark and I lumbered up the snow-covered booby-trapped talus field to the base of the smear, left of the rock routes in a groove and corner system, and we started up. Winter suddenly rolled in again, we shivered our balls off, half the meager ice fell off upon touching it, the other half fractured, protection proved challenging, the climbing was OK but not great, super technical and hard to rate, I got scared, but we didn’t see another soul and we climbed it and we were happy. The smiles stayed on our faces all the way back to the car. Kind of like scoring a morsel from the cookie jar.