Training is all about adaptation. Specifically what experts call a “stress-adaptation” – regularly subject yourself to a greater-than-normal stress, and your body adapts. When injured, quite simply you have to embrace other expressions of adaptation.

Hangboarding is something I can do in my current state, so I’ve been hitting it recently. I’d been hangboarding on and off over the past few years, I’m a fan of it and it seems to have not only longstanding, but recently resurgent, support from serious rock climbers (i.e. those far better than me) as a potent training tool. 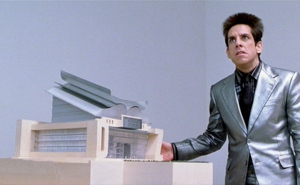 Derek & a model of his School for Kids Who Can't Read Good.

When injured, you can choose to focus on what you can’t do. I can’t walk. Can’t run. Can’t bike, ski, or climb. Poor me. Except that attitude gets me nowhere fast, and so I’ll occasionally wallow that way for a few seconds (at most), and then focus on what I can do. It’s a form of problem solving, which I love. Did Derek Zoolander let his coveted “School for Kids Who Can’t Read Good (and want to learn how to do other things good, too)” die when he saw a model and threw a tantrum, asking if it was a school for ants and insisting that it had to be at least, at least…THREE times this big! (That’s the explanation for the opening line, for those not privy to the new shit, man – it’s from the movie Zoolander, second only to the Big Lebowski.) No. He went out and achieved anyway.

Someone recently asked about motivation to train when injured. In part, I’ve beat it into myself over the years to where training has become part of my life. Though I’m dealing surprisingly well with being gimped-up, of course I have ups and downs and of course it’s getting old, and I’m getting way twitchy. Can’t sleep at night, sit there all fidgety during half the day, sometimes have to get up and just shake my arms and jump around. Being active has been an enormous part of my life for a long time. Beyond that, though, I suppose part of it for me has to do with gratitude, appreciation. Focus on what I can’t do? What bullshit. So I have one leg at the moment. That means I have another leg, two arms, ten fingers, my core (which runs from your hips to shoulders), and my brain. Plenty to work with.

Up at my little place in Estes Park, I made myself a gimp-sized hangboard stand, sized so my butt would hang just a few inches above my crash pad and I wouldn’t risk falling on my leg. Probably unnecessary, as it’s reasonable enough to carefully hangboard while standing off my good leg, but dudes love building shit. I wish I were good at building shit (and I want to learn how to do other things good, too).

Anyway, I’m down at Jenna’s place this week, thus away from my “Hangboard for Ants,” and so my great friend Matt Samet picked me up, took my gimp ass on some errands (I’ve got a margarita experiment in the works…I test all my margaritas on myself before subjecting it to you – and that’s my Kelly Margarita Guarantee!), and then to the Boulder Rock Club. I’ve come to fully dig the BRC. Got me thinking about what I like and dislike about different gyms, which I’ll bore you with soon.

Anyway, a sampling of what you can do with a broken leg. Yesterday’s workout:

• 45 minutes hangboarding. That’s way more than I’ve done before – when fully able, I don’t spend that much time hangboarding, in part because I climb often in the gym and outside, but this reminds me of the opportunity in my injury. Warmed up and worked my way into it with the bigger rungs, mostly 20–30 second hangs, then worked into harder ones, first-digit, 10–15 seconds max (hard for me), and down to some tip-hangs I could hold for only 5 seconds or so (smallest rungs in staggered position – one hand two rungs higher than the other hand). Mostly open-handed grip or partial crimp, to avoid the tendon-stressful full crimp. Usually shorter rest periods than the power boys recommend, generally starting each new hang/rep on the minute, as taking longer rest between reps annoys me. I did rest enough between sets (my sets usually = 3 hangs), though, to eventually read a good piece on the “just like me” idiot phenomenon of Sarah Palin, in the New Yorker, so that was cool (for the record, I don’t want a leader to be just like me. Our nation’s leaders should be a helluva lot smarter than me, and certainly smarter than the average dullard – look at what eight years of a moronic frat boy whom the average ‘Merican wanted to “have a beer with” got us?). Where was I? Oh yeah. Did my session on their overhanging campus board. The wooden rungs make for a great surface, friendlier on the skin and better than some of the hangboards out there. Their campus board starts close to the ground, and has a bunch of cushy pads beneath it, making it a perfect impromptu hangboard for ants.

• Some one-legged squats, or “pistols.” A great exercise for both strength and balance, in which I extend my gimpy right leg in front of me, somewhat parallel to the ground, and, from standing, squat on my left leg till my butt is down by my heel, then stand up. Another opportunity: since surgery on my left knee in 2005, my left leg has been a little weaker than my right.

• Some one-legged push-ups. Left foot on ground, right leg straight out behind me. Very easy/basic core stabilization, compared to doing push-ups with both feet touching.

• Muscle-ups. From a dead hang on the rings (rock rings and such work fine), pull up and turn-over your wrists and shoulders into the bottom of a dip, and press it out, continuous. So, essentially go from a dead hang to a full pressed-out position, like when you’re at the top of a dip. Haven’t done these in about a year, psyched I still could. Never spent much time on them, but kind of want to get to 10 consecutive. Maybe I’ll work on that. Did 3 sets (7-6-6), closely spotted by Matt in case I wiped out. Long (several minutes) rest in-between, strenuous exercise.

• Wrapped it up with some core work, including my all-important “pointer dog”/”superman” exercises for my spine (major spinal reconstruction surgery, with fusion, in 2005). I’ve had to increase my balance and core stability when I do the side with my right arm and left leg extended, which means my right knee and foot (and left hand) would be touching. But since I’m not supposed to put any pressure on my right lower leg/foot, I lift my foot and allow only my right knee to touch. Thus, I’m touching only right knee and left hand when I do the right arm and left leg extension – balancy! It inspired me to do the other side that way, too, in order to maximize benefit.

So there we go. Now I’m sore, feeling good, and not so twitchy. At least for today.